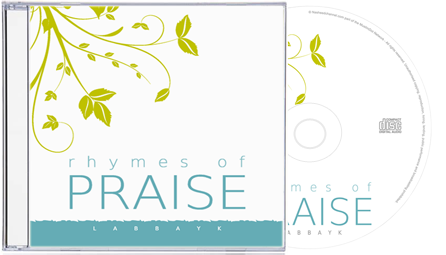 Rhymes of Praise was released in August 2008. This Nasheed album contains 8 uplifting nasheeds praising Allah and Prophet Muhammad (PBUH). Also featuring Qur’an recitation by Shaykh Shah Mizanul Hoque. The nasheeds composed have no musical instruments and no musical instruments were utilised in composing the vocal harmonies. The lyrics and content have been verified by scholars in order to maintain the limits and boundaries of Shari’ah.May Allah Ta’ala reward the scholars who have given their valuable time in verifying our lyrics and content, namely Shaykh Hussain Ahmed, Mufti ‘Umair Zulfiqar, Shaykh Muhammad Sibbini and Shaykh Sulayman Ghani.

We thank Shaykh Shah Mizanul Hoque for his beautiful recitation of the Holy Qur’an and also brother Mujahidul Haq who has kindly done the translation to the verses. The translation of the Qur’an by Mufti Taqi Uthmani was utilised. We thank Gareth Redfarn for his valued suggestions and also for taking pain-staking long hours in recording, mixing and mastering the album. We would also like to thank the team at MuslimDot.com and Nasheedchannel.com our recording company for giving us the opportunity to help compile this album And last but not least we thank our parents, family and friends who have continuously given their support in making this album possible.

May Allah Ta’ala accept all the good we do and may He shower everyone with His blessings and endless bounties, amin.